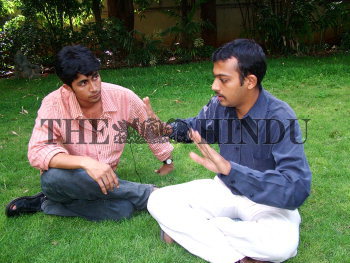 Caption : Karthik and Iswar of the Chennai-based Evam theatre group during an interaction in Coimbatore on December 03, 2004. The group, which was started last year, has so far seen 5,000 people sitting through its shows. Karthik and Iswar were in town to check out auditoriums for their play, "Art", to be staged on December 11 at the Nani Kalaiarangam. Photo: S. Siva Saravanan