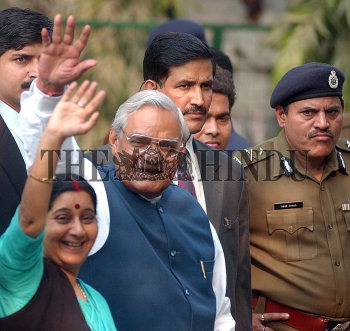 Caption : The former Prime Minister, Atal Bihari Vajpayee, along with the Bharatiya Janata Party (BJP) leader, Sushma Swaraj (left), at a protest rally in New Delhi on December 1, 2004, against the price hike and the anti-people policies of the Central Government. Later, the leaders along with the party workers courted arrest near the Delhi Gate in Central Delhi and were released after a few hours. Photo: R.V. Moorthy