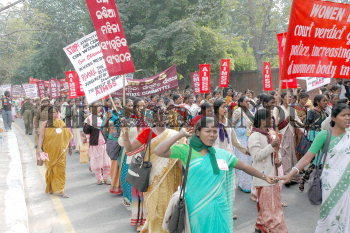 Caption : Women from different parts of the country participating in a protest march organised by the All India Mahila Sanskritik Sangathan (AIMSS) near Jantar Mantar in New Delhi on December 1, 2004, against the atrocities and crimes on women. Photo: Anu Pushkarna