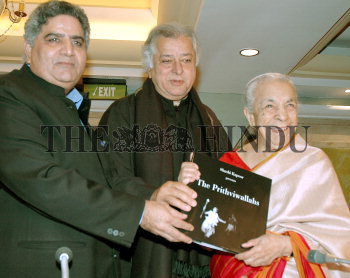 Caption : Zohra Segal (right) and actor Shashi Kapoor at a function to release the book, "Prithviwallas" in New Delhi on Novermber 25, 2004. Publisher of the book Pramod Kapoor is also seen (left). The book scans the period from 1929-2004. It is a story of how a 23-year-old man called Prithvi came to Mumbai, landed a job as an extra in his first film, and as a hero in the third film, "Cinema Girl" in 1929. It is also about the birth and growth of the Prithvi Theatre founded by Prithiviraj Kapoor. The book is narrated to Deepa Gahlot by Shashi and is published by Roli Books. Photo: Anu Pushkarna