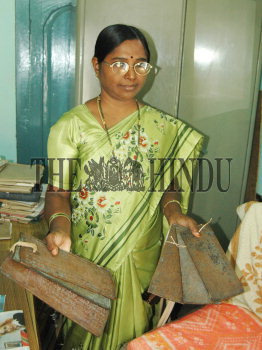 Caption : S. Deva Darshini, the librarian of the Gowthami Regional Library, Rajahmundry, displaying the "Anaparthi Daana Saasanalu", charitable deeds of a ruler of this area, Sri Kumar Giri Reddy, etched on copper plates, one of the rare collections of the library. The library evolved from the personal collection of a poet, Nalam Krishna Rao, in 1898. It came to be known as 'Vasuraya Grandhalayam' initially and later as 'Veeresalingam Pustaka Bhandagaram'. In 1979, in response to an agitation, the State Government took over and accorded it the status of a regional library. Photo: C.V. Subrahmanyam, 18-11-2004