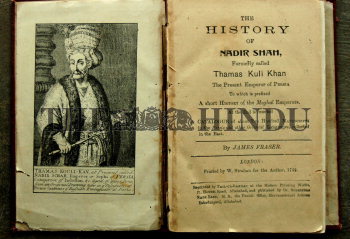 Caption : A copy of the the ''History of Nadir Shah,'' the emperor of Persia, written by John Fraser of London in 1742, that is part of the collection of rare books at the Gowthami Regional Library in Rajahmundry. The library evolved from the personal collection of a poet, Nalam Krishna Rao, in 1898. It was called ''Vasuraya Grandhalayam'' initially and later came to be known as ''Veeresalingam Pustaka Bhandagaram''. In 1979, in response to an agitation, the State Government took over and accorded it the status of a regional library. Photo: C.V. Subrahmanyam, 18-11-2004