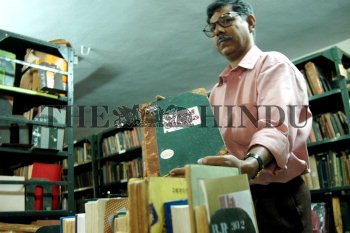 Caption : An employee of the Gowthami Regional Library in Rajahmundry displays the McKenzie's Manuscript, one of the rare collections of the library. McKenzie (1754-1821), an Englishman employed as an engineer with the East India Company, had recorded his impressions of his tour of South India. The library evolved from the personal collection of a poet, Nalam Krishna Rao in 1898. It became the 'Vasuraya Grandhalayam' initially and later was known as 'Veeresalingam Pustaka Bhandagaram'. In 1979, in response to an agitation, the State Government took over and accorded to it the status of a regional library. Photo: C.V. Subrahmanyam, 18-11-2004