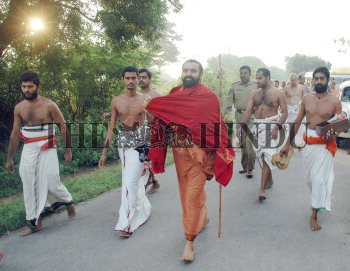 Caption : The Junior Sankaracharya of Kanchi Kamakoti Peetam, Sri Vijayendra Saraswathi, at Tiruttani on his way to the Kanchi Mutt on November 16, 2004. The Junior Acharya who was performing a YAGNA at Mahbubnagar, Andhra Pradesh, concluded it on 15th November and left by road for Kancheepuram. Earlier, the Sankaracharya of the Kanchi Kamakoti Peetam, Sri Jayendra Saraswathi, was arrested by the Tamil Nadu police on 11th November on charges of "abetting" the murder of Sankararaman, manager of the Varadarajaswamy Temple, Kancheepuram. Photo: K.V. Srinivasan