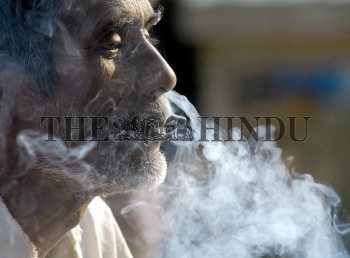 Caption : A man smokes in a public place (which is banned in India) in Guwahati on November 16, 2004. According to the recent survey 195 milion people -154 milion men and 41 milion women consumed tobacco in India, which is found significantly higher in poor, less educated, scheduled castes and scheduled tribe populations. In India, tobacco consumption is responsible for half of all the cancers in men and a quarter of all cancers in women. India also has one of the highest rates of oral cancer in the world and in India alone approximately 400, 000 people a year die from the lung cancer because of tobacco smoking. The World Health Organization predicts that tobacco deaths in India may exceed 1.5 milion annualy by 2020. Photo: Ritu Raj Konwar