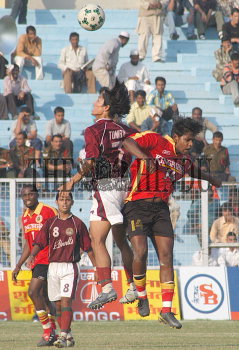 Caption : Chandan Das (14), captain of East Bengal team, and Tomba Singh of Mohun Bagan in action during the final of the Durand Cup football tournament at the Ambedkar stadium in Kolkata on November 10, 2004. Photo: S. Subramanium