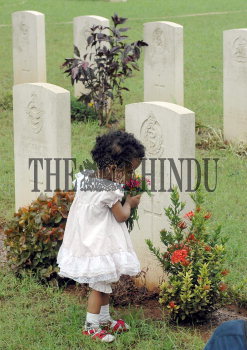 Caption : To all those who served with honour and pride: The Rememberance Day ceremony was held at the War Cemetry situated at Nandambakkam, Chennai on November 10, 2004 by the British Deputy High Commission in association with Commonwealth War Graves Commission. The British Deputy High Commissioner, Stuarts Innes, Consul General of United States of America for South India, Richard D.Haynes, representatives from Russian and Singapore High Commission were among the people who witnessed the act of remembrance. They also laid wreaths at the memorial. The Last Post and two minute silence were observed during the proceedings. The Commonwealth War Graves Commission was established by Royal Charter in 1917 as the Imperial War Graves Commission and assumed its current functions and name by supplemental Charter in 1964. The Commission's responsibilities are to mark and maintain the graves of those members of Commonwealth armed forces who died in the two world wars, to build memorials to those who have no known graves, and to keep and make available to the public records and registers of such burials, as well as civilians killed by enemy action during the Second World War. India is one of the six Commonwealth member countries which constitute the commission, the others being Australia, Canada, New Zealand, South Africa and the United Kingdom. Many Indians who served in the Indian and British Army and Merchant Navies were either lost or killed in the two world wars and their names are commemorated on the Memorial. Around 160000 soldiers laid down their lives during these wars. They did so with honour and brought lasting renown to the name of India. Photo: S.R. Raghunathan