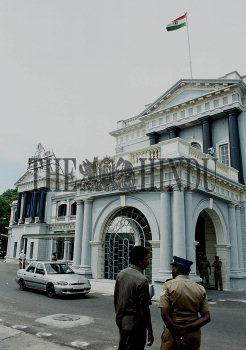 Caption : A view of the Fort St. George which houses the Secretariat and the Assembly complex of the Tamil Nadu Government in Chennai, the capital of the southern Indian State of Tamil Nadu. Fort St.George is the first fort to be built by the British in India in 1640. An important landmark of the city of Chennai, the fort is the birthplace of the modern Indian army and houses a number of Government buildings. It is located on the shores of the Bay of Bengal and is a wonderful example of military architecture, with thick massive walls and a moat surrounding it. It began as a protected trading post under the British East India Company. It houses a number of non-military structures within its periphery.