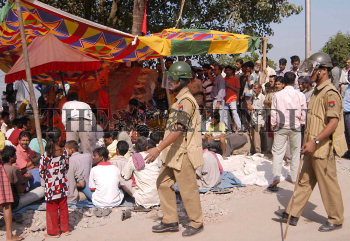 Caption : Police keep up vigil, as the devotees performing `puja' at the place where the Hanuman temple was demolished, near Governor's residence, during the 12 hours Guwahati city bandh call given by Vishwa Hindu Parishad (VHP) in Guwahati on November 5, 2004. The bandh call was given in protest against the demolition of this hundred years old Hanuman temple during an eviction drive by the district administration. Photo: Ritu Raj Konwar