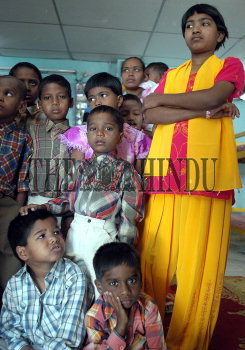 Caption : Dr. Peter Piot, Executive Director, Under Secretary-General of the United Nations, UNAIDS interacting with the HIV infected kids at Diya, a home for the virus infected kids at Freedom Foundation in Hyderabad on November 4, 2004. Andhra Pradesh is one among the hard-hit states of the country considered to be high risk HIV/AIDS zone in India. Amongst the 49 high prevelance HIV/AIDS districts in India, seven are in Andhra Pradesh. According to National Aids Control Organisation at present the total adult population of HIV/AIDS infected is 5.1 million compared to 43 million worldwide. In India about 55,000 children are reported to be affected by the killer virus compared to 2.5 million across the globe. Dr. Peter Piot, (not in picture) Executive Director, Under Secretary-General of the United Nations, UNAIDS, visited the home for HIV/AIDS paitents on November 4, 2004. Photo: A. Roy Chowdhury