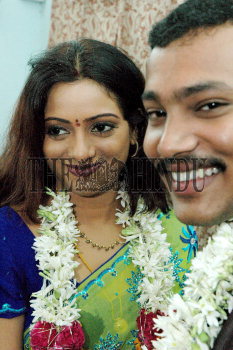 Caption : Actress and popular TV anchor, Uday Bhanu, and her husband, Vijay, in a happy mood after exchaning garlands in front of the media after a press conference in Hyderabad on October 27, 2004. A controversy arose when she sought city police protection as her family was allegedly against her love marriage with Vijay. They got married in Arya Samaj Mandir on October 25th. Uday claimed she and her husband were facing threats to life from her mother and brother forcing her to seek police protection. Photo: Mohammed Yousuf