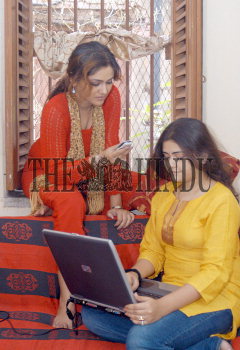 Caption : Bengali film actress Ms. Koneenica Banerjee (down) along with her younger sister Ritwika sends and receives SMS of Durga Puja greetings in Kolkata on October 26, 2004. SMS sensation peaked among the close-to-10 lakh Hutch and Airtel subscribers on the day of Vijaya Dashami and there were some 25 lakh messages sent over the four Puja days through Airtel network. The rise in Shubho Bijoya picture messages and logos was phenomenal. Earlier people used to visit their relatives and friends with sweets after the puja and exchange greetings by hugging each other but now emails, SMS, e-cards and telephone calls is replacing the traditional festivity. The hi-tech communication is at one hand is shrinking the world but on the other it HAS definitely distanced the human traditions and culture. Photo: Parth Sanyal