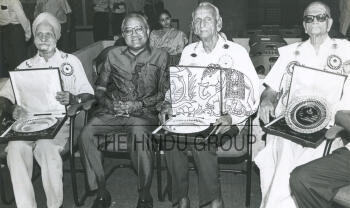 Caption : Former Ranji Trophy cricketers who were felicitated in Madras on December 28, 1994, A.G. Ram Singh, M.J . Gopalan and P.S. Ramachandran along with Mr. A.C. Muthiah, President TNCA, before the cricket match between Tamil Nadu and Karnataka. (Published in The Hindu on December 29, 1994) PHOTO: THE HINDU ARCHIVES