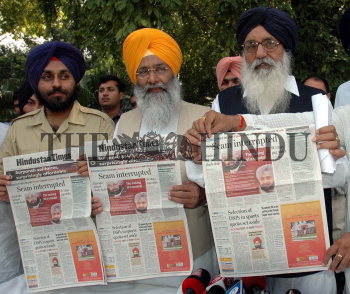 Caption : (From right) The Shiromani Akali Dal (SAD) president and former Punjab Chief Minister, Prakash Singh Badal, his son and Rajya Sabha MP, Sukhbir Singh Badal and the party leader and Lok Sabha MP, Sukhdev Singh Dhindsa, display at a press conference in New Delhi on October 18, 2004, the copies of the 'Hindustan Times' newspaper that had reported the alleged involvement of the Punjab Chief Minister Capt. Amarinder Singh (not in pic) and his son Raninder Singh (not in pic) in the illegal foreign exchange transactions. Photo: Sandeep Saxena