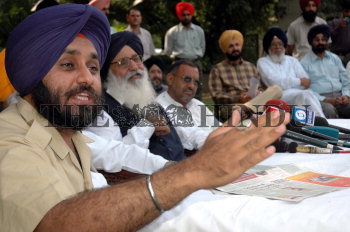 Caption : The Shiromani Akali Dal (SAD) president and former Punjab Chief Minister Prakash Singh Badal (second left) and his son and Rajya Sabha MP Sukhbir Singh Badal (ext left), along with the members of their party and the BJP,attending a press conference in New Delhi on October 18, 2004. The press conference was held to discuss the alleged involvement of the Punjab Chief Minister Capt. Amarinder Singh (not in pic) and his son Raninder Singh (not in pic) in the illegal foreign exchange transactions. Photo: Sandeep Saxena