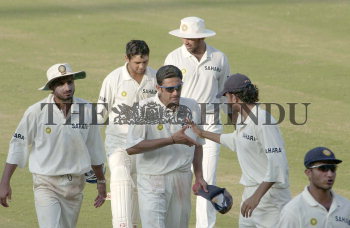 Caption : India's Anil Kumble is being congratulated by Irfan Pathan for his haul of six wickets in the second innings on the fourth day of the second cricket Test match between Australia and India at the M.A. Chidambaram stadium in Chennai on October 17, 2004. Photo: V. Ganesan