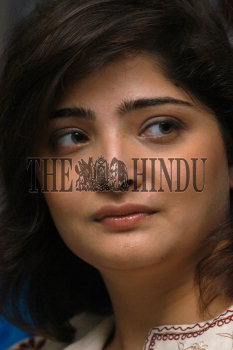 Caption : Actress, singer and patron of 'Vision of India' Vasundhara Das,at a press conference in Bangalore on October 13, 2004. Vision of India, an initiative in aid of primary education, HIV/AIDS awareness and theatre for the underprivileged, is bringing to Bangalore, "I'm not Baji Rao", a play adapted from Herb Gardner’s award-winning Broadway production, "I’m not Rappaport", to raise funds for the "Theatre for Children" project at the Ranga Shankara, which incidentally is the dream theatre project of the theatre personality Arundhati Nag. Photo: V. Sreenivasa Murthy