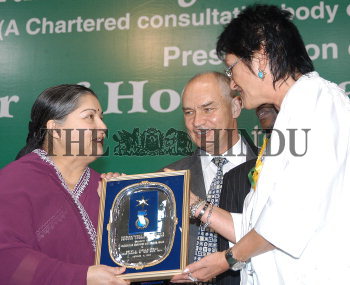 Caption : The Tamil Nadu Chief Minister, J. Jayalalithaa, being presented 'The Golden Star of Honour and Dignity Award' by Natalya I Krivutsa, Head of Ukraine-headquartered International Human Rights Defence Committee (IHRDC), a chartered consultative body of the United Nations, at a function in Chennai on October 11, 2004. The award was presented in recognition of her service towards gender equality and protection of weaker sections of the society. Photo: Vino John