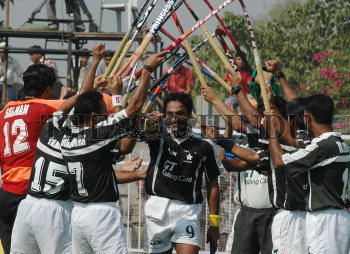 Caption : Pakistan player Sohail Abbas, who became the highest scorer in international hockey, is honoured by his teammates at the Guru Nanak Dev University hockey stadium after the seventh Test match of Friendship Hockey Series between India and Pakistan at Amritsar in India on October 7, 2004. Sohail Abbas surpassed the world record of 267 goals by Paul Litjens of The Netherlands. Photo: Rajeev Bhatt