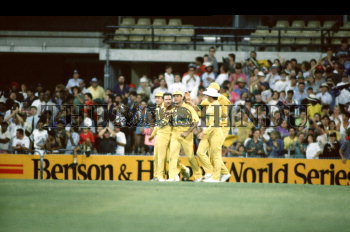 Caption : Australia's Mike Whitney is being greeted by his captain Allan Border and other team members for taking a catch to dismiss Indian captain Mohammed Azharuddin during the second final of the WSC one day international cricket tournament between Australia and India at Sydney in Australia on January 20, 1992. Photo: V.V. Krishnan