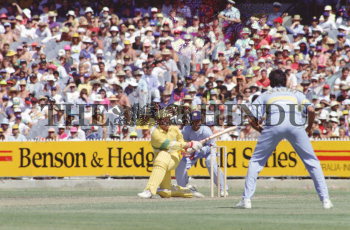 Caption : David Boon of Australia sweeps Narendra Hirwani, watched by wicketkeeper Chandrakant Pandit, during the first final of the WSC one day international cricket tournament between Australia and India at Melbourne in Australia on January 18, 1992. Photo: V.V. Krishnan