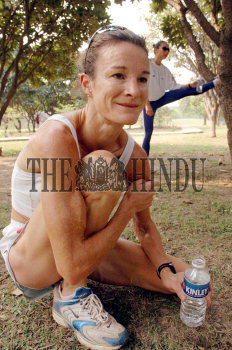 Caption : Ireland's Sonia O'Sullivan, one of the top contenders in the women's section, relaxes after a practice session on the eve of the world half marathon championship organised by the International Association of Athletic Federations (IAAF) at the Nehru Park in New Delhi on October 2, 2004. Photo: Sandeep Saxena