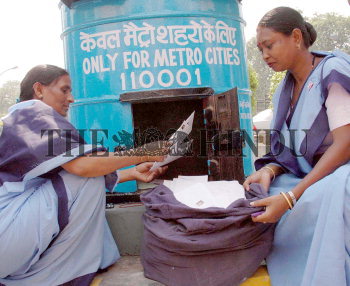 Caption : Postal staff in there new uniform at the Government Post Office at Gole Dak Khana in New Delhi on October 01, 2004. Postmen will now wear full-sleeved light blue shirts with navy blue pants, while their women counterparts would sport light blue saris and navy blue blouses. The public sector National Textile Corporation would supply the dress material, which would have the logo of India Post embroidered on it. The Khaki to blue marks a major victory for the postal employees union who had been demanding a change in the dress code for years. The change in the dress code coincides with the 150th anniversary of the postal department. Photo: Sandeep Saxena