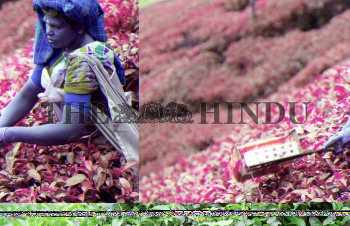 Caption : The tea industry in the State is suffering a slack period in production. Between January and July 2003, the total production from the State was 32.9 million kg which dropped to 28.9 million kg. The production cost of a kg of tea in 1985 was Rs 17, which went up to Rs 60 in 2003. Many plantation units are closing down across the State because of high cost of production. Photo: H. Vibhu, 26-09-2004