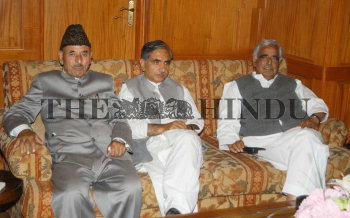 Caption : The Jammu and Kashmir Chief Minister Mufti Mohammad Sayeed, along with the Minister for Tourism, Gulam Hassan Mir (centre) and the Minister for Agriculture and Cooperatives, Abdul Aziz Zargar (left), at a meeting of the People's Democratic Party's (PDP) political affairs committee in Srinagar on September 21, 2004. The decision of Mufti Mohammad Sayeed to contest the by-election to the Pahalgam Assembly seat, was taken at the meeting. The Assembly seat was vacated by his daughter and PDP president, Mehbooba Mufti, after her election to the Lok Sabha in May last. Photo: Nissar Ahmad