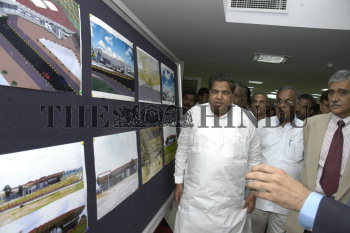 Caption : The Karnataka Chief Minister N. Dharam Singh, having a look at the photographs displayed at the Trade Centre Bangalore (TCB), at the Export Promotion Industrial Park Phase 2 at Whitefield near Bangalore on September 20, 2004. Industry Minister, PGR Sindhia(second right), and N.N. Khanna, Chairman and Board of Directors, Karnataka Trade Promotion Organisation(right), are also seen. The TCB complex, estimated at Rs.17 crores, is being developed by the Karnataka Trade Promotion Organisation (KTPO), a joint venture of the India Trade Promotion Organisation and Karnataka Industrial Area Development Board (KIADB). This 5371 sq.m. air-conditioned permanent exhibition hall has been built in an area of 50 acres. The exhibition hall has a space-frame roof of 10,000 sq.m. and is said to be the largest steel space-frame in the country. Photo: K. Gopinathan