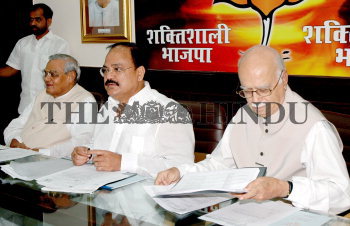 Caption : Former Prime Minister Atal Bihari Vajpayee along with BJP party President Venkaiah Naidu and leader of Opposition in Lok Sabha L.K. Advani at the Central Election Committee meeting in New Delhi on September 16, 2004. The Central Election Committee began the exercise of finalising its list of candidates for the October 13 elections to the Maharashtra Assembly. Photo: Anu Pushkarna