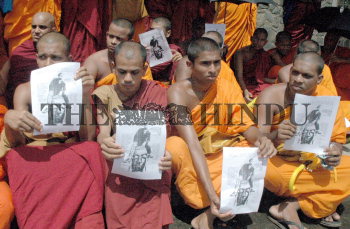 Caption : Sri Lankan Buddhist monks protest in front of the U.S. Embassy in Colombo on September 13, 2004, against the U.S. movie "Hollywood Buddha". They demanded a ban on the film as its advertisement shows a man seated on the head of a Buddha statue. They also demanded to denounce the use of Buddha images for commercial purposes. Photo: Sriyantha Walpola