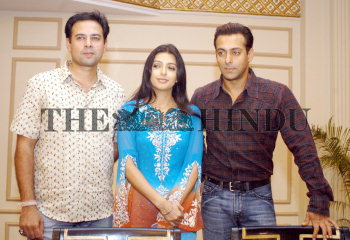 Caption : Director-actor, Atul Agnihotri (left), along with the star cast of the film "Dil Ne Jise Apna Kaha". Salman Khan (right) and Bhumika Chawla, at a press conference to announce the release of the film, in New Delhi on September 7, 2004. Photo: R.V. Moorthy