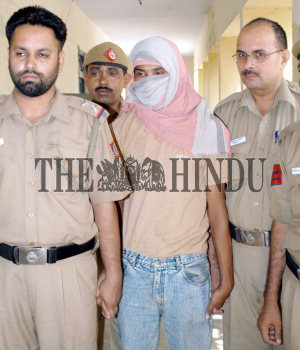 Caption : Moti alias Mohit (face covered), one of the accused in the Anand Lok double murder case, being produced in court by the Delhi police on September 5, 2004, after his arrest in Bahraich on September 4th. USAID employee Pushkin Chandra, and his friend Kuldeep were murdered by Moti and his accomplice Rajesh at Pushkin's outhouse in Anand Lok, South Delhi, a few days back. Photo: V. Sudershan