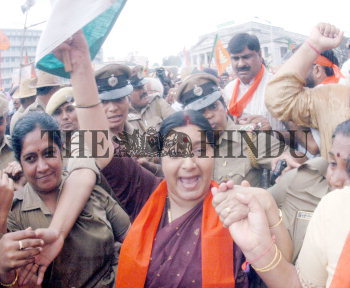 Caption : The BJP leader Sushma Swaraj, courting arrest on the fifth day of the "Satyagraha" organised by the party in Bangalore on September 5, 2004. BJP has organised a nationwide campaign against the prosecution of the former Madhya Pradesh Chief Minister Uma Bharti (not in pic), in the Idgah Maidan flag hoisting case. Photo: V. Sreenivasa Murthy