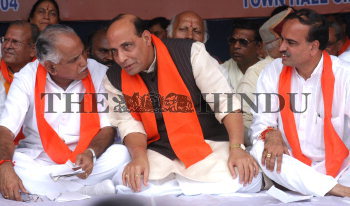 Caption : The Bharatiya Janata Party (BJP) leader, Rajnath Singh, flanked by his party colleagues, B.S. Yediyurappa (left) and H.N. Ananth Kumar (right), on the third day of the "Satyagraha" organised by the party in Bangalore on September 3, 2004. BJP has organised a nationwide campaign on three issues, including the "unconditional withdrawal" of a case against the former Madhya Pradesh Chief Minister, Uma Bharti (not in pic), who is in judicial custody in Hubli. Photo: V. Sreenivasa Murthy