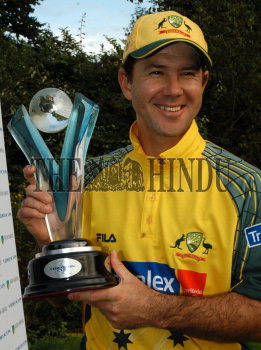 Caption : AMSTELVEEN, HOLLAND, 28/08/2004: Australian captain Ricky Ponting poses with the Videocon Trophy after beating Pakistan in the finals at the VRA ground in Amstelveen, HOLLAND, on August 28, 2004. Photo: V.V. Krishnan