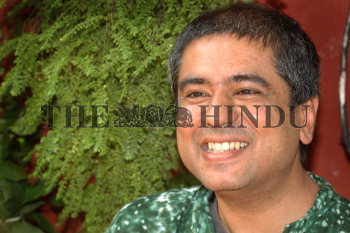 Caption : Playwright-turned-film director Mahesh Dattani (film, Mango Souffle) during an interview in Bangalore. As a playwright, he has already carved a niche for himself in contemporary Indian literature, especially Indian writing in English. His first play in 1988, 'Where there's a will', won the Sahitya Akademi prize that year. His other plays such as 'Dance like a man' and 'Final solutions' are considered as modern classics of Indian theatre. He has also written a couple of radio plays for the BBC. Dattani is also reputed as a theatre director, trainer and teacher. Photo: Mr Murali Kumar 24-08-2004