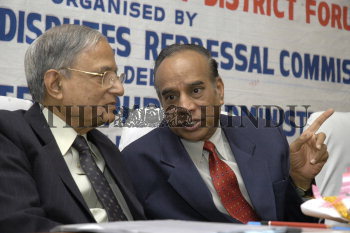 Caption : The Chief Justice of Karnataka High Court and Patron-in-Chief of the Karnataka Judicial Academy, N.K. Jain (right), with the president of the National Consumer Disputes Redressal Commission, New Delhi, M.B.K. Shah, at the inauguration of the 'Orientation Training Programme for Presidents and Members of District Forums', in Bangalore on August 23, 2004. Photo: K. Gopinathan