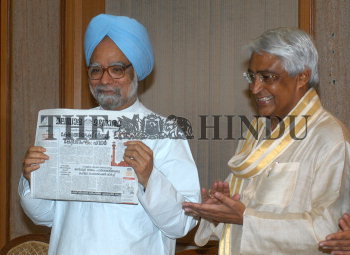 Caption : The Prime Minister Manmohan Singh (left), releasing the Delhi edition of the 'Malayala Manorama', during a function at his residence in New Delhi on August 17, 2004. The Director and Managing Editor of Malayala Manorama, Philip Mathew, is also seen. Photo: Shanker Chakravarty