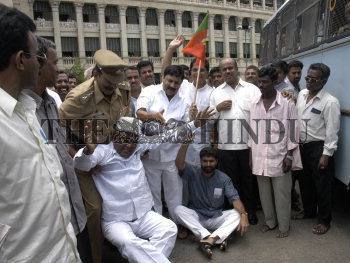 Caption : Police arresting the Opposition MLAs of the Karnataka Legislative Assembly and BJP members who were staging a dharna against the State Government in front of the Vidhana Soudha in Bangalore on August 17, 2004. The agitators were demanding, among other things, the setting up of a special court to deal with the alleged land scam in and around the city. Photo: K. Gopinathan