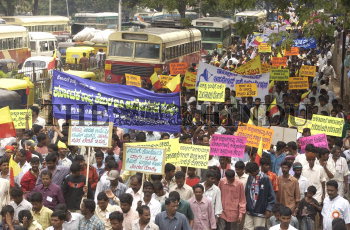 Caption : BANGALORE, KARNATAKA, 16/08/2004: Members of Karnataka State Cable TV Operators Association at a Bangalore Chalo March, to protest against the Sun Network's decision in Bangalore on August 16, 2004. Chennai-based Sun TV Network has already converted all the kannada channels - Udaya TV, Ushe and Udaya News into pay channels with effect from August 01, 2004. It has fixed Rs.18 as monthly subscription rate for each of their kannada channels. Photo: G.R.N. Somashekar