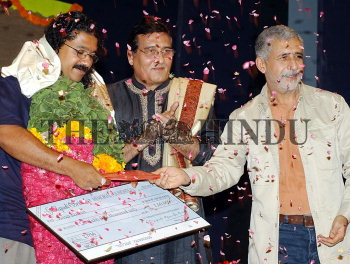 Caption : Anup Kurian, who received AWARD of over 1.5 lakhs for best director of 'Manasarovar', being congratulated by actor Naseeruddin Shah, during the 7th Gollapudi Srinivas NATIONAL AWARD function, organised by the Gollapudi Srinivas Memorial Foundation, at the Music Academy, in Chennai, on August 13, 2004. Vinod Khanna, member of parliament, looks on. Photo: N. Sridharan