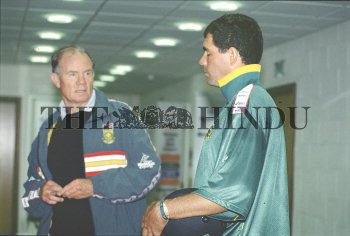 Caption : South Africa's PETER Pollock and captain Hansie Cronje in a discussion before their match against Zimbabwe at Chelmsford, England on May 29, 1999 during the Cricket World Cup 1999. Photo: N. Sridharan