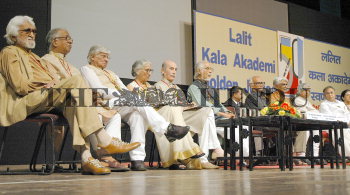 Caption : Some of the prominent personalities (from left) M.F.Hussain, K.G.Subramanyan, Krishen Khanna, Kapila Vatsyayan, Jehangir Sabavala and Amar Nath Sehgal, who received the Lalit KALA Ratna Awards from the President A.P.J.Abdul KALAm (second from right) in New Delhi on August 09, 2004. Union Minister for Information and Broadcasting Jaipal Reddy is sitting next to him. Photo: Rajeev Bhatt