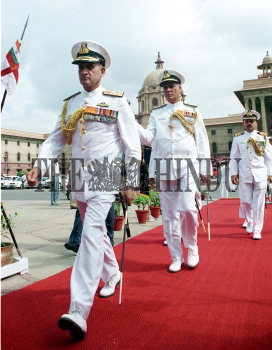 Caption : The New Chief of Naval Staff Admiral Arun Prakash, walking to the podium to review the Guard of HONOUR prior to taking charge from outgoing Chief, Admiral Madhvendra Singh in New Delhi on July 31, 2004. Admiral Prakash, who took over as the 20th Chief of Naval Staff is a gallantry award (Vir Chakra) winner during his deputation to the Indian Air Force during the 1971 India-Pakistan war. The new Navy chief has the distinction of being the first Commander of India's first tri-service command in the Andaman and Nicobar Islands. Photo: Sandeep Saxena