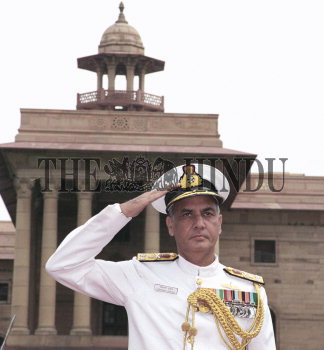 Caption : Newly appointed Vice Chief of Naval Staff, Vice Admiral Yashwant Prasad, taking guard of honour at South Block in New Delhi on July 29, 2004. Vice Admiral Prasad, who was the Flag Officer Commanding-in-Chief (FOCinC) of the Southern Naval Command (SNC) prior to his elevation, is a navigation and aircraft direction specialist, who has seen action during his deputation to the Omanese Navy. A recipient of the Param Vishisht Seva Medal (PVSM), the Ati Vishisht Seva Medal (AVSM) and the Vishisht Seva Medal (VSM) for distinguished service, Vice admiral Prasad is a keen golfer and enjoys aero-modelling and wood craft. Photo: Anu Pushkarna