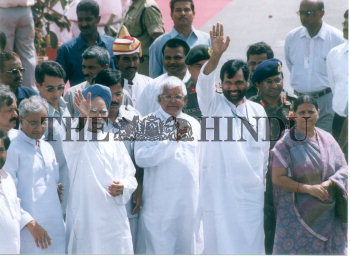 Caption : The Prime Minister Manmohan Singh waves to the supporters, on his arrival at the Patna airport on July 27, 2004. The Union Minister for Railways, Lalu Prasad Yadav (third from right), the Union Minister for Chemicals and Fertilizers, Ram Vilas Paswan (second from right) and the Bihar Chief Minister, Rabri Devi (right), are also seen. The Prime Minister is on a day's visit to Bihar to make an aerial survey of the flood affected areas. Photo: Ranjeet Kumar