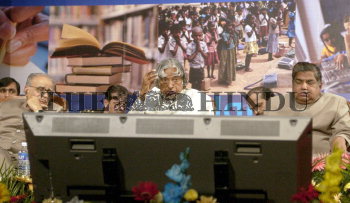 Caption : The President A.P.J. Abdul Kalam(second from left), interacting via satellite with students at five remote classrooms in Karnataka, Ahmedabad and Nasik, during the inauguration of the conference on Education Satellite (EDUSAT) organised by the Indian Space Research Organisation (ISRO) and the Association of Indian Universities at the St. John's Hospital auditorium in Bangalore on July 23, 2004. EDUSAT, a satellite meant exclusively for the education sector, will be actually launched in September, 2004 by ISRO. Also seen are the Karnataka Governor, T.N. Chaturvedi (left) and the Chief Minister, N. Dharam Singh (right). Photo: K. Bhagya Prakash