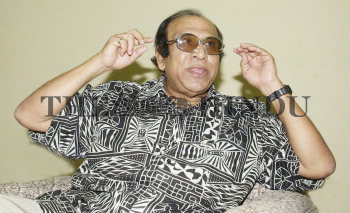 Caption : Well known football personality, P.K. Banerjee during an interview at his residence in Bangalore. He had played in 84 internationals during the 13 years he had represented India. This included three Asian Games (Tokyo, Jakarta and Bangkok). He was member of the Indian team which finished fourth (the country's best result) in the 1956 Melbourne Olympics and had captained the national team at the 1960 Rome Olympics. A Padmashree award winner in 1990, Banerjee was associated as Coach of the national team from 1970 to 1986. Photo: G. P. Sampath Kumar (20-7-2004)